The Wicked Healthy Cookbook 55% off

The essential cookbook for graduates of Thug Kitchen, by vegan community insiders with attitude, Chad and Derek Sarno. 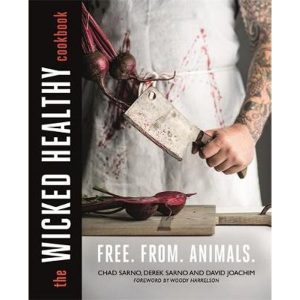 Vegetarians can often miss out at barbecue time, but not with this book. The authors promise flavoursome dishes and highlights include cauliflower ribs, sloppy BBQ jackfruit sliders with ‘slaw and grilled peaches with vanilla spiced gelato (The Sun)

Whatever preconceptions you had about plant-based cooking, prepare to be wrong. Derek and Chad deliver you a world of flavors, textures, and downright sexy food! These plant-pushers know their stuff. Learn from them and feel better because of them. Cook the future-of-food now! (Jane Land and Matthew Glover, founders of Veganuary)

Chad and Derek just created the next required reading in plant-based cooking. You can’t even flip through this book without saying, ‘DAMN, now I hafta make that.‘ So, make your life easier, tastier, and Wicked Healthy with the Sarno boys (Michelle and Matt, New York Times bestselling authors of the Thug Kitchen series)

Nearly 130 wickedly healthy vegan recipes from plant-pushing chef brothers Derek and Chad Sarno, with no evangelism or preaching – just a focus on good ingredients and exciting flavours. One for herbivores who love food. (Standard.co.uk)

The Sarno brothers, leading lights of the plant-based movement, are the brains behind the Wicked Healthy culinary collective . . . Whether you are going the whole vegan hog, or trying it a few days a week, this book is the perfect inspiration. Grilled peaches with vanilla spiced gelato: need I say more? (The Lady)

Deliciously Ella The Plant-Based Cookbook only £7.99

£7.99
Added to wishlistRemoved from wishlist 0

Deliciously Ella with Friends Less Than Half Price

£10.63
Added to wishlistRemoved from wishlist 0

£60 Donation to Viva! for switching to Ecotricity

Added to wishlistRemoved from wishlist 0